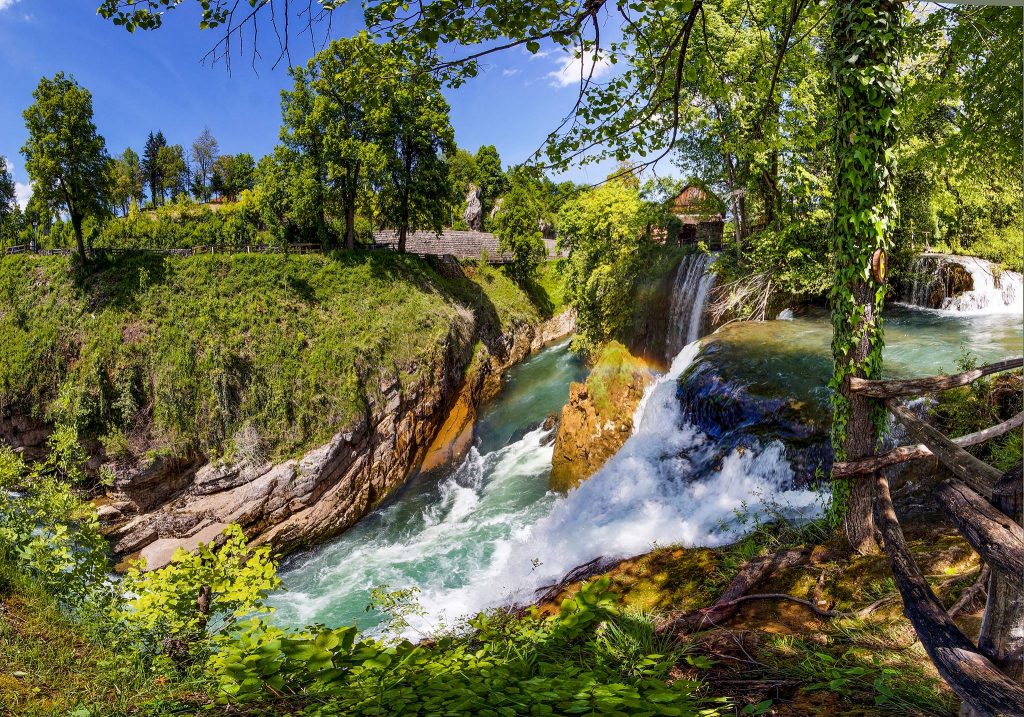 Just the name of the settlement – Rastoke tells us that there is something that is splitting up, and that is the river Slunjcica, which, through a series of small and large waterfalls, pours into the canyon of the river Korana. The most famous waterfalls in Rastoke are located on our property:

“Buk” waterfall is named because of the noise it creates at its fall into the Korana canyon. It is the richest and largest waterfall, so this waterfall is the crown of your visit to Rastoke. Through the wide or playful waterfalls named “Virićki”, the water of Slunjcica is pouring in Korana over “Buk”, it strikes upon rocks with its force sprinkling into a fine mist of silvery color from which the sun creates a great rainbow. Who wants to try out some of the many theories of passing under the rainbow, this is the place to do it.

“Hrvoje” waterfall was named after a man who had long ago jumped from it. “Hrvoje” surpasses even the largest waterfall “Buk” with its height. A sparkling and playful waterfall “Hrvoje” invisibly splashes on the cliff through which it flows to all sides. With its exceptional beauty, it bring out pleasant and cheerful mood in his visitors. In the past it was characterized by a cute nose, but due to heavy rains nad big waters, it had turned into rocks beneath the waterfall itself.

The waterfall in the heart of Rastoke resembles a scattered hair in many ways, because it is crumbling in narrow streams through the protruding travertine barriers. The legend says that the fairies had a silver hair color, and spent time on green slopes along the water. For this reason, today there is a belief that the silverhair fairies, at night, visit Rastoke and rest in a pleasant natural ambience. Waterfall “Vilina Kosa” got its name from these fairies. Would you like to experience a part of the fairy-tale charms, a fairy hair, a viewpoint with a view of the Korana canyon that runs towards Karlovac, take a walk to this waterfall.

Winnetou totem is an original scene from the film “The Treasure of the Silver Lake”.

The German writer Karl May in his novels created the image of an Indian chief from the Apache tribe – Winnetou. According to these novels, movies about the adventures of Winnetou were filmed and had great success. “The Treasure of the Silver Lake” is the first in a series of Western movies based on the stories of Karl May, and is also the most famous continuation of this international co-production filmed in Croatia. It was shot in 1962. in production of Rialto film from Berlin and in collaboration with Jadran film from Zagreb on locations throughout Croatia. The film director is dr. Harald Reinl and the characters of the three main protagonists were played by Pierre Brice (Winnetou), Lex Barker (Old Shatterhand) and Stewart Granger (Old Surehand).

Some of the most famous locations where the film was filmed are NP Paklenica, NP Plitvice Lakes, NP Krka, Zrmanja River canyon, Vransko Lake and others. An Indian village and a saloon was located in Rastoke and Slunj. Local people acted as extras, and the witchdoctor was played by Mile Štrk, one of the legends of the town of Slunj.

After successfully filming the legendary movie, the German production house leaves in Rastoke a totem from the filming that has been preserved to date, two sides of the totem are original, and on the other are Croatian motifs.

Interestingly, the totem was extremely difficult to set up and several tractors took part in the venture itself to properly position this obelisk which hid its foundation underneath the ground to a depth of as much as 2 meters. 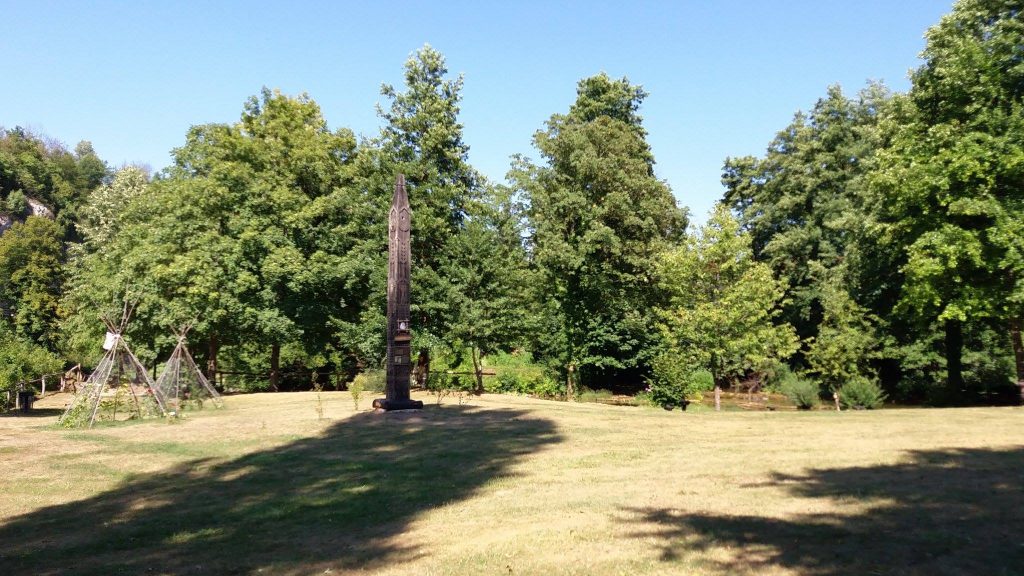 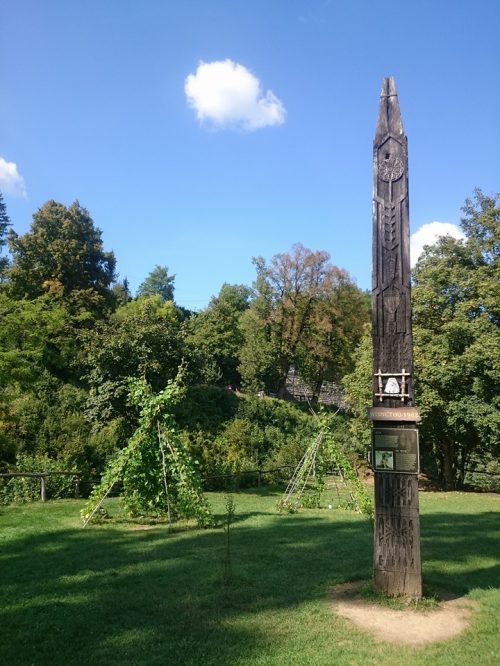 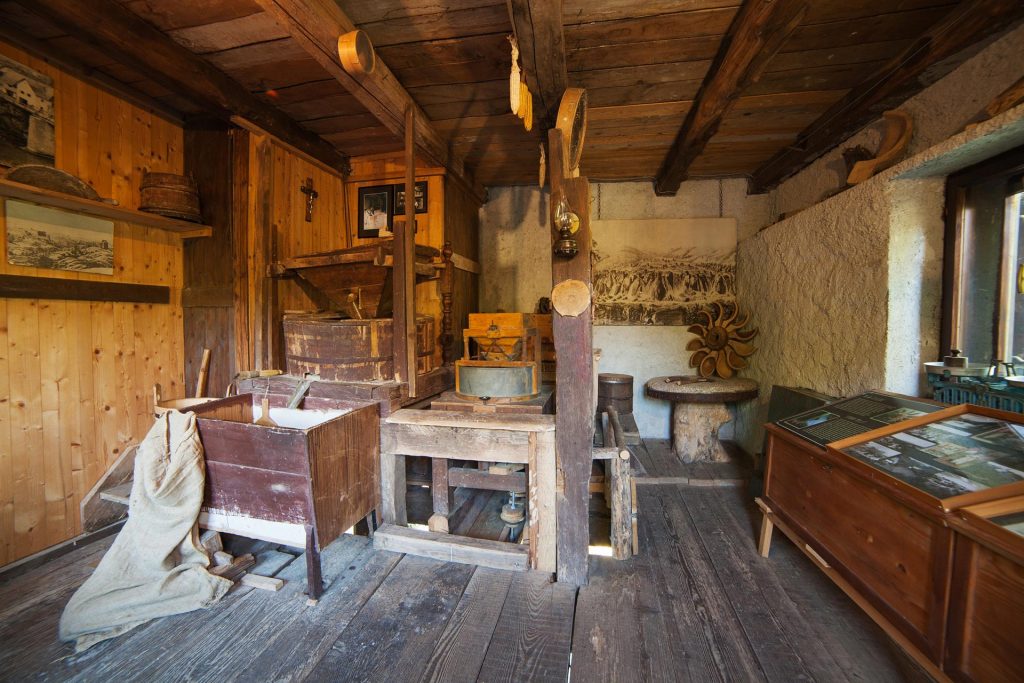 The natural environment and the way of life, so – called milling, also conditioned the unique architecture and a kind of styling of the mills, which can be categorized as the construction of the Dinaric – Posavian type. Each mill must have two to three millstones, one for “black mold” and one for “white mold”. Mills with the shape of spoons could only be build on the edges of the land, where waterfalls are at least three to five meters high, with drainpipes descenting in 35 degrees. Shovel shape mills need the weight and the amount of water  that gives the moving force, the spoon shape mills use the force of dropping water and the corresponding amount of water, which, with its spike in the spoon triggers an upright spindle and a millstone with it.

Rastoke’s mills were build on a tuff floor with dams in front of it. The so-called “heads” of oak or chestnuts trees protected the mills from the sudden impact of the water, and the excess water flowed into the streams and collapsed beside the mill.Wood for building mills comes from this area. Oak and chestnut trees are from the lowlands of Kordun, and beech, alder and pine trees from mountainous regions Chapel and Plitvice Lakes, where sawmills where located. 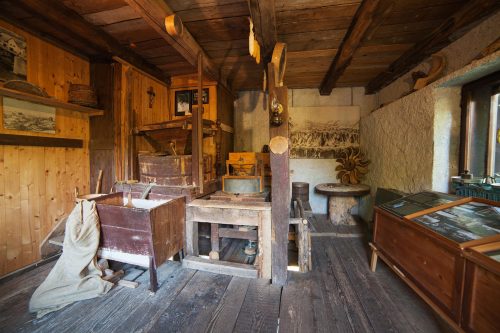 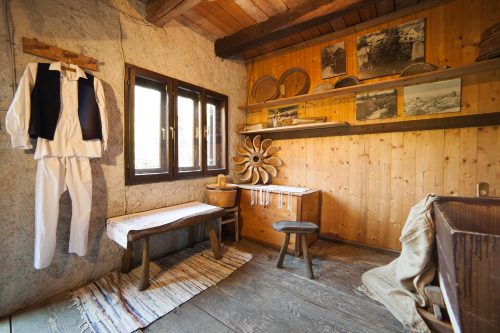 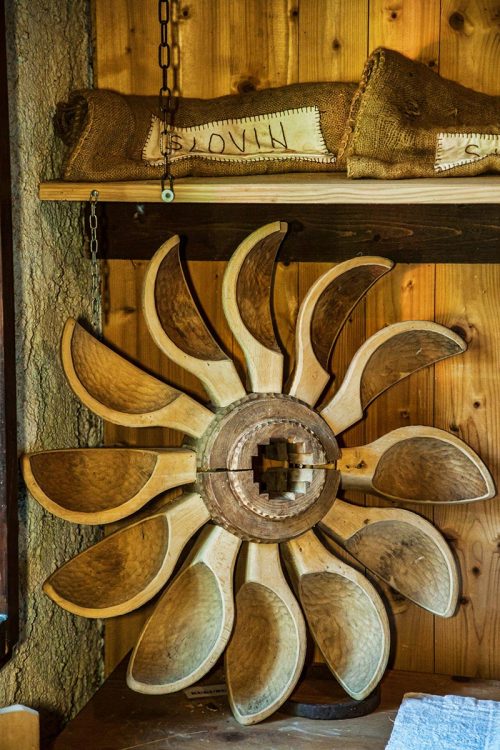 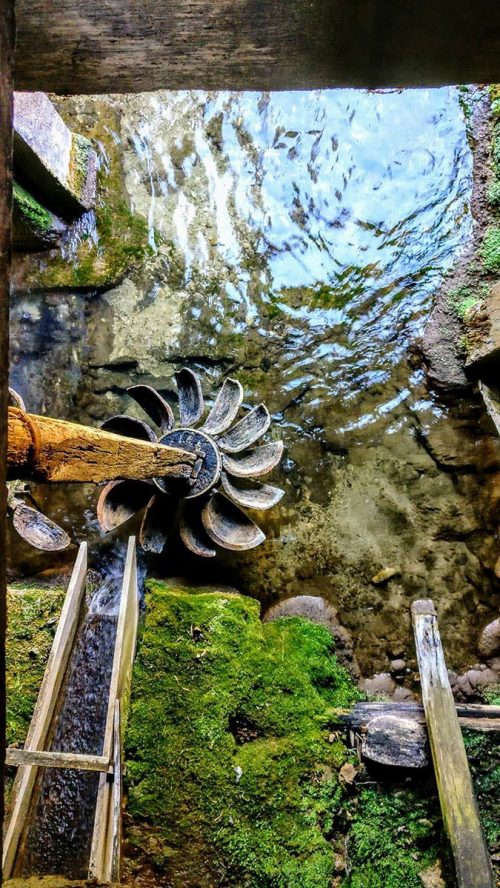 The canyon of Korana, decorated with Slunjčica`s waterfalls that are very vivid and loud and in some places several tens of meters high. Numerous forms are created by the action of water like the cave itself.

The cave you have access to in our estate is an excellent example of water activity that carved beautiful tuff rocks and shows all its luxury. The formation of travertine forms is a dynamic process of interaction between physical and chemical factors and microorganisms in water. Sedra (tuff) is therefore our great natural treasure, one of the fundamental phenomena of our karstic rivers and water in general. It creates barriers through which waterfalls crash, and they slow down the rivers and change them completely. It is gentle, sensitive to pollution, but also a beautiful handicraft of playful nature. Our cave, although short, will show you how these processes look from close range. If you find yourself in a warm day, find out how cool and comfortable it is. Going through it you will be leveled with the Korana that runs right near you. 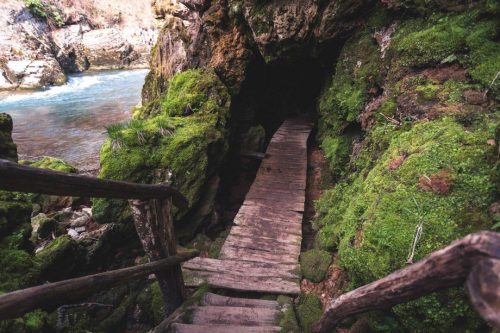 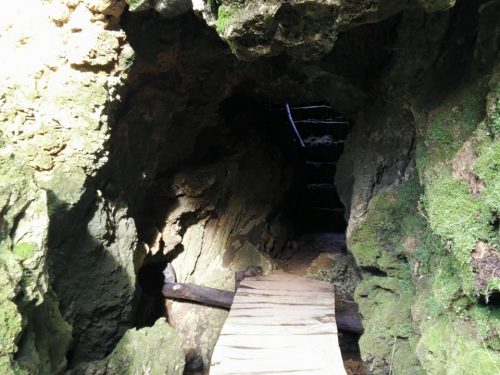 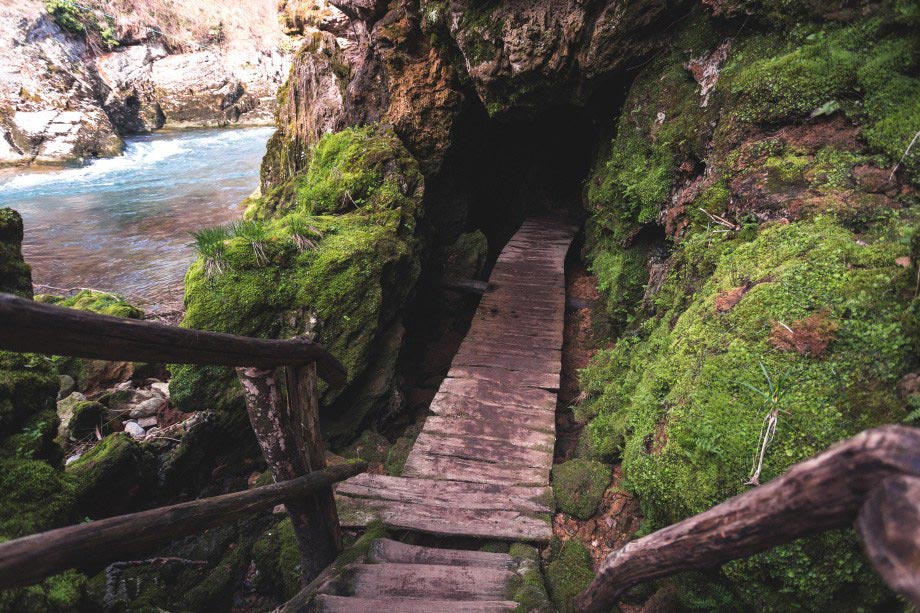 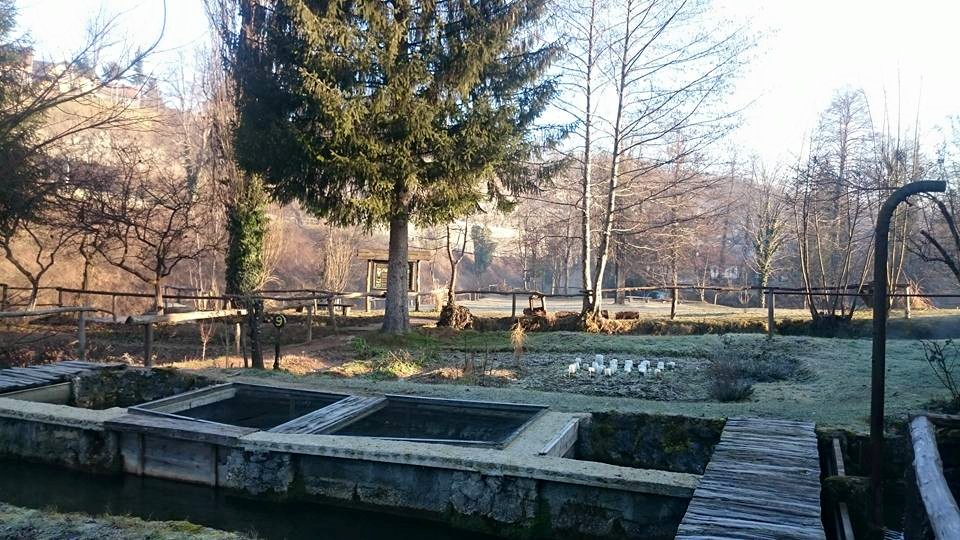 It is a special place in the center of our papilionaceous estate, inhabited by Californian trout (lat.Oncorhynchus mykiss).

It spends most of the time in the middle of the water surface, only in extremely clean and clear rivers, just like Slunjčica. This fish is a rich source of protein and vitamins, so it is a desirable meal in every household and always fresh specialty in our tavern. If you are accompanied by your little ones during a picnic you can cheer them by feeding fish in other ponds and getting acquainted with our domestic ducks that take care of our pond. 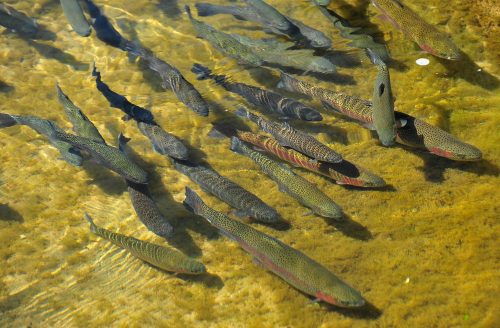 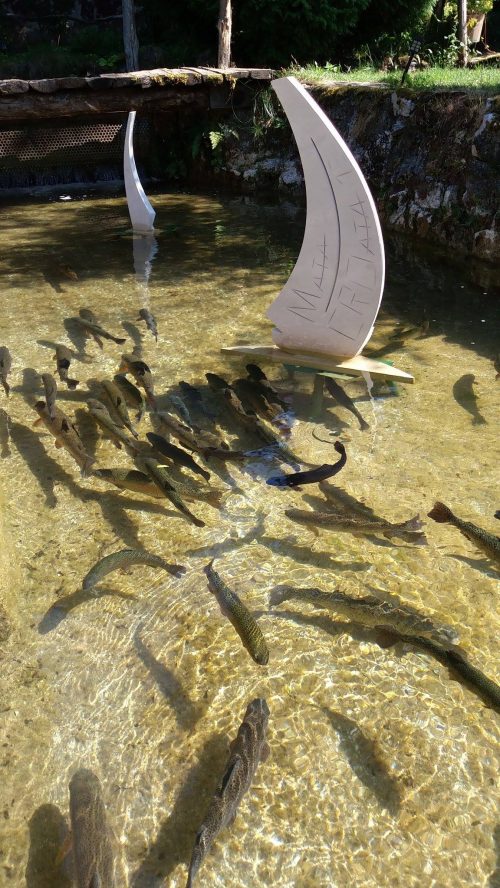 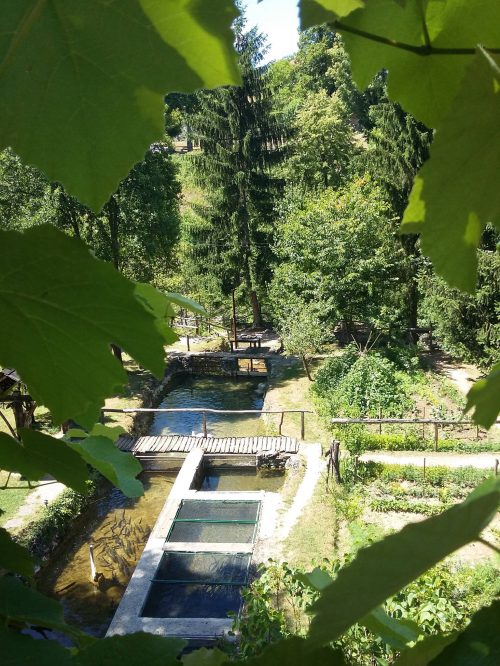 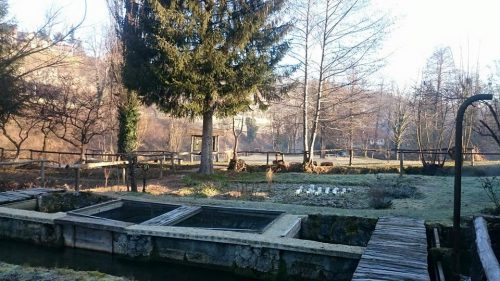 In addition to milling, the power of the water in the Rastoke was also used for the final processing of textiles in columns and crosstrees.

Everything that was weaved during the winter months, was bolted under a strong jet of water for 5 to 6 hours in Rastoke pits and baskets, deep barrels with holes on the sideboards.

Around the house, all the surrounding fences were decorated with handmade rugs (called šarenice, biljci) and traditional washer made the carpets and rugs glossier and richer in colour.

Even today neighbors from Rastoke come to wash their parents old carpets in our estate . 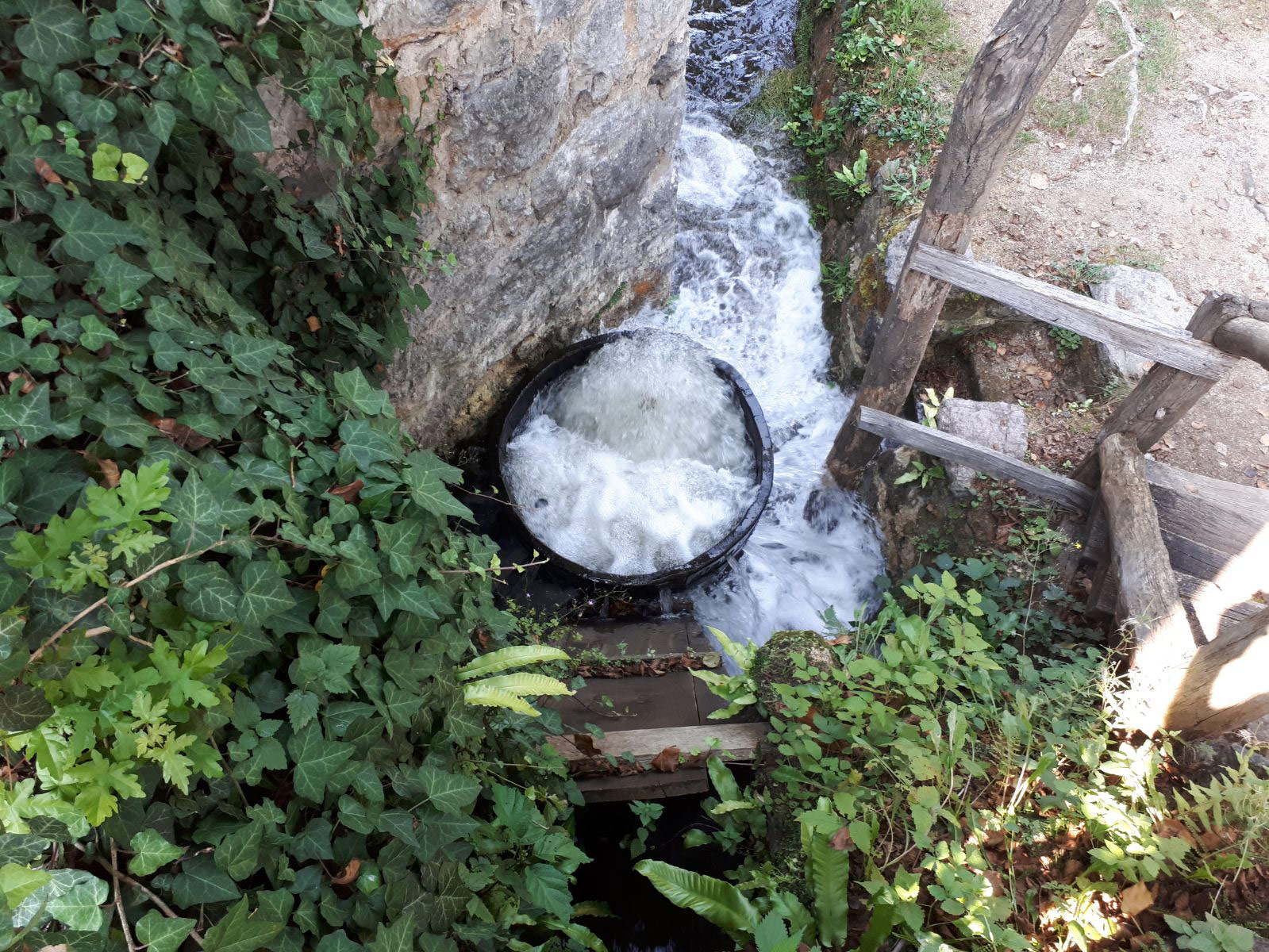 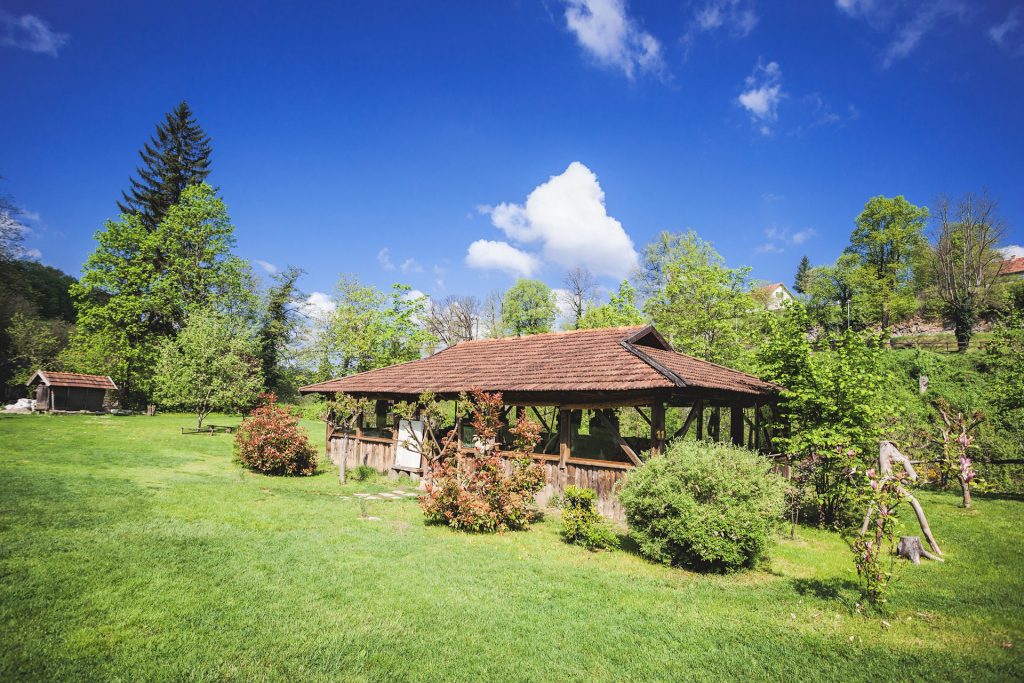 In this museum there is an ethnographic collection that shows the lives of our ancestors.

You can see the collection of household appliances and furniture that have been used on a daily basis in households for years.

Older generations can recall their childhood and youth through the collection, and young people can learn something about the history and lifestyle of our parents and their parents.

Since its inception, collecting policy has been linked exclusively to the area of Slunj and Rastoke, and the character of the museum is defined as cultural-historical.

The spindle, the loom, the juniper, the chamois, the sconces, the petrolix are just some of the exhibits that the Holjevac family has gathered for years. 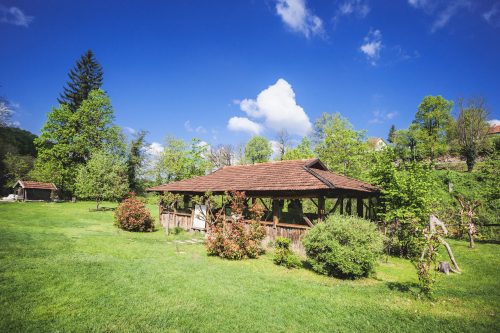 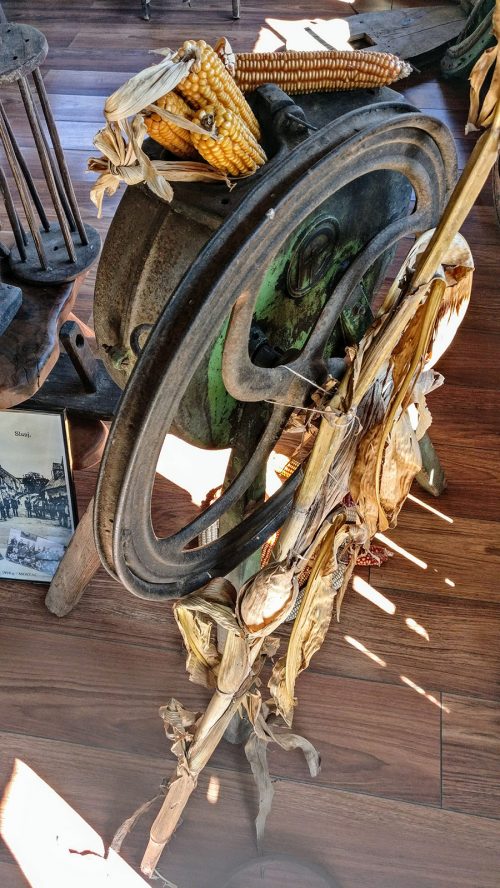 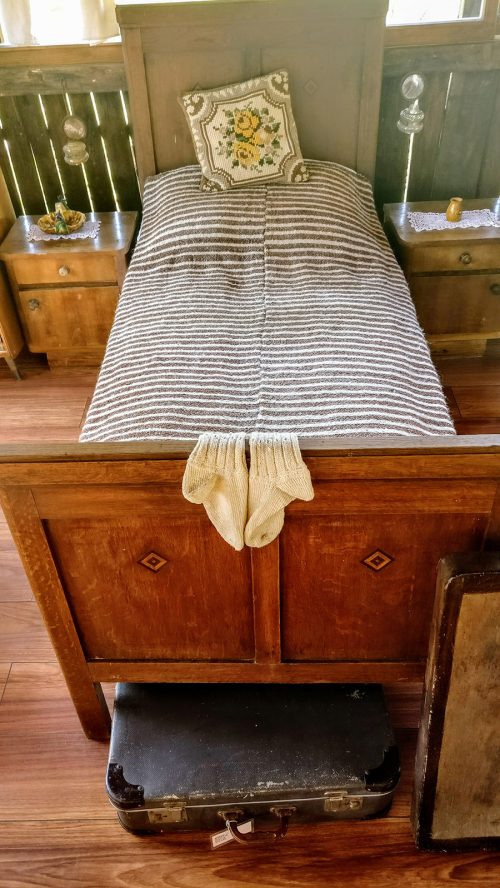 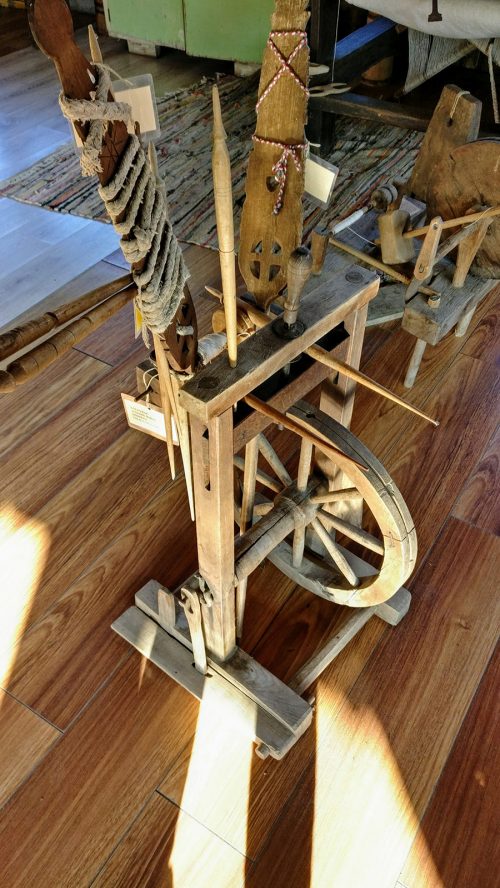